In teaching art history lessons to kids, whether it be just to your own children in homeschooling, or to a whole class, one era you can’t leave out is the Pop Art era of the 1960’s. This is when art took a turn and became a more relaxed and fun thing and stopped taking itself quite so seriously.

Artists like Warhol and Lichtenstein created unique pieces, unlike any art that had been previously seen. 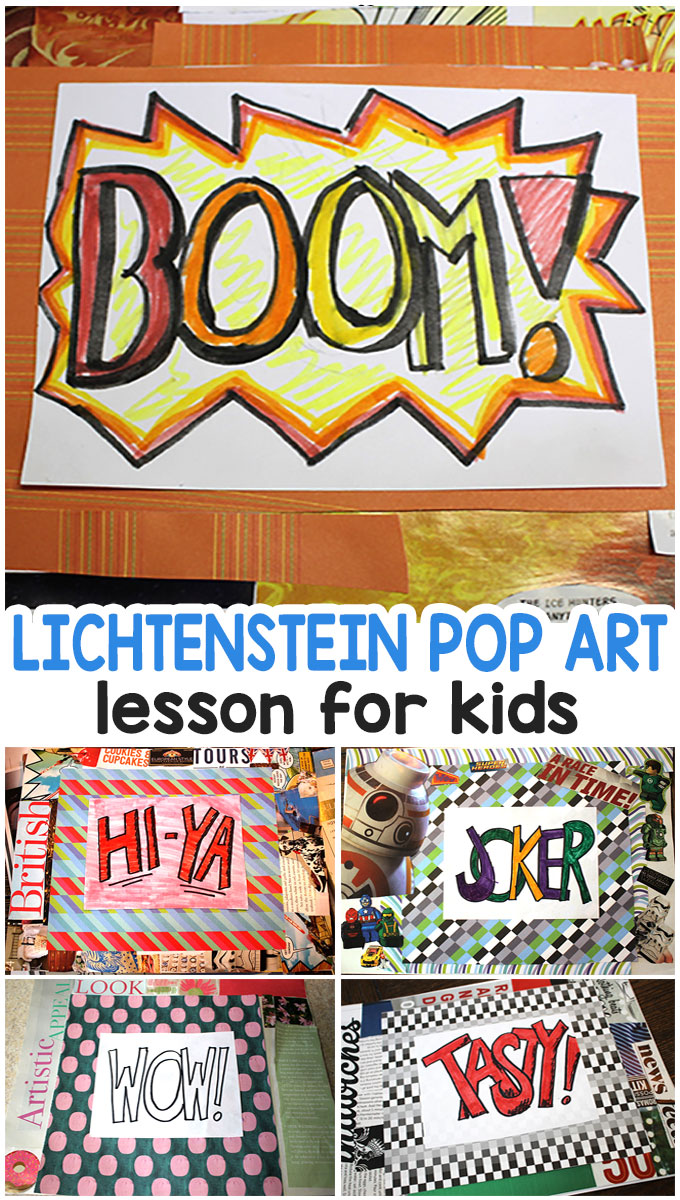 Show the kids examples of product ads or some Warhol pieces to give them an idea of what it may have looked like.

This lesson will cover the biography of Roy Lichtenstein and give you a fun, mixed media piece you can have your kids create that uses inexpensive and common supplies, so it makes it a great lesson to put in when you aren’t in the mood for something heavy.

He came on the art scene in the time that abstract expressionism was acceptable, but his art didn’t quite fit that description or label.

He used recognizable characters like Popeye or Mickey Mouse in his early pieces and he loved to use bright, primary colors and bold lines.

Shortly after, other artists were creating art that also didn’t fit into that mold, and definitely couldn’t be considered anything classical or even just “modern”.

Andy Warhol and Jasper Johns were two of those artists and before long the Pop Art movement happened. 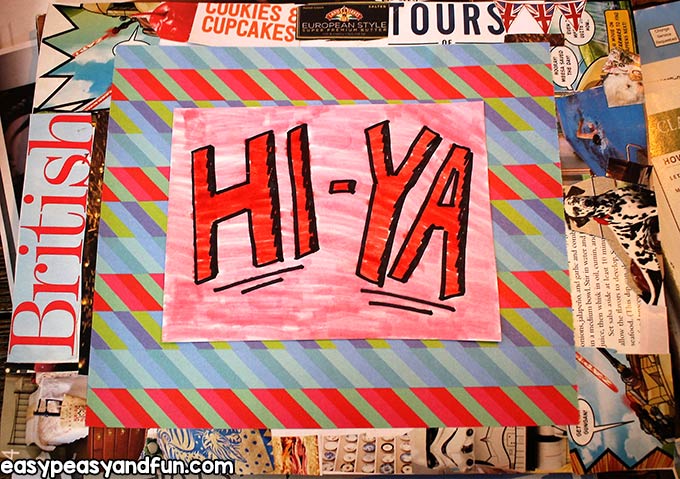 Lichtenstein was the one out of the bunch who used cartoons more than any other and he became famous for his comic book style pieces.

He would take a cropped version of a DC comic and focus just on one part of it, which changed the “story” entirely and blow the size up to huge as well.

Also he used a lot of black and white patterns with bold colors on these pieces and they do truly make a statement and are images you don’t forget and would know were his if you saw them years later. 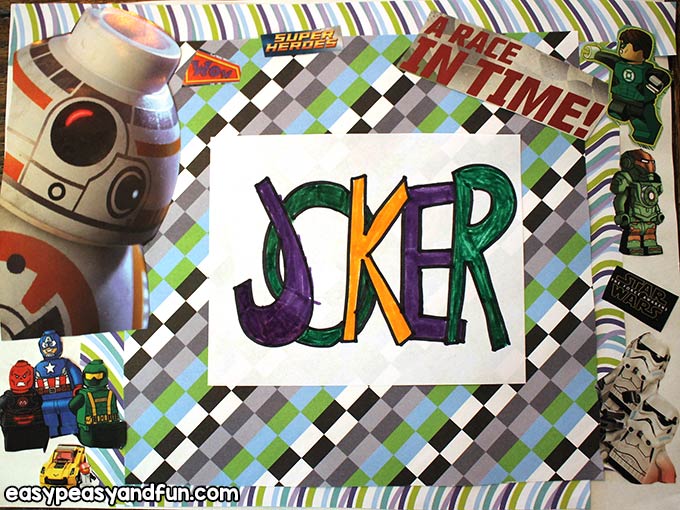 He utilized what was called “Ben-Day” dots, which were used in newspapers and comic books to create shadowing and textures.

Sometimes just one set of dots was used, such as black and white printed ones, and other times they were layered on in different colors.

Lichtenstein used stencils and paint to make his art but he wanted it to look printed, and he achieved that well in his masterful technique.

He even stopped signing his pieces on the front to help that effect. 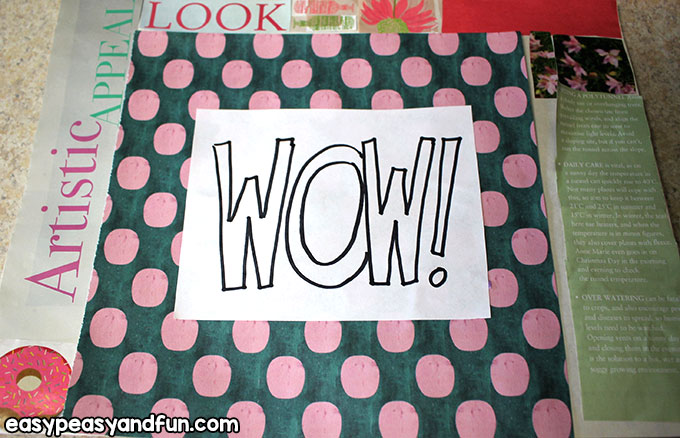 To make artwork in his style, I suggest using lots of black and white, even if just here and there, combining it with bright, bold, primary colors.

I taught this lesson just after teaching on Walt Disney and cartooning so that we could tie in cartooning and comic book lettering with this for one piece. 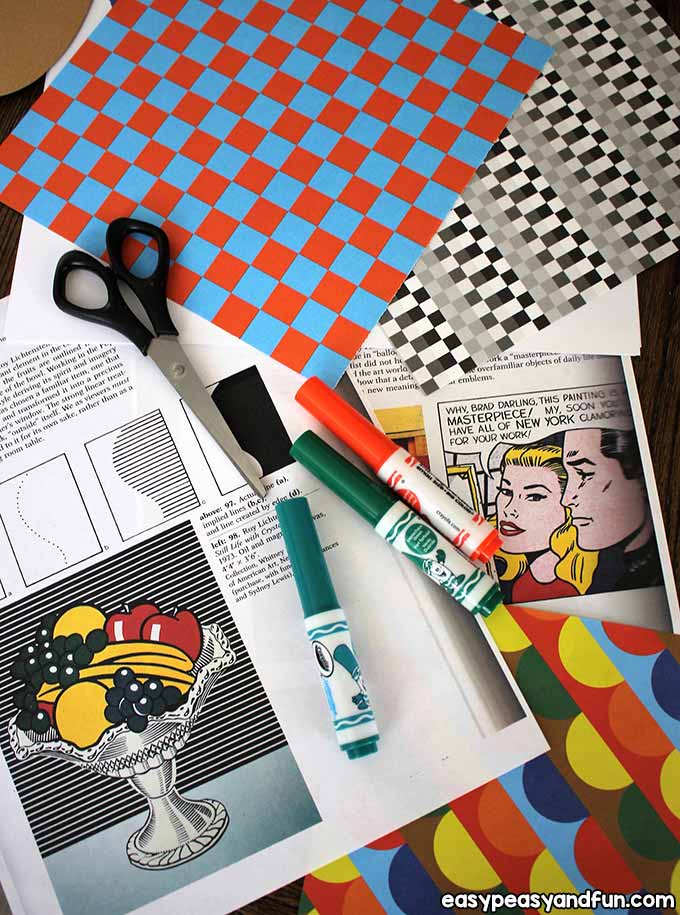 Place down the tablecloth prior to teaching so that no glue ends up where you don’t want it.

First, explain who Lichtenstein was and show some examples of his work, telling the kids about using those colors and printed pieces together.

Cutting out Textures and Lettering

Cutting out textures and even just black and white lettering from magazines can help create the piece easily without having to actually draw it, and you can achieve a printed, comic or cartoon type look as well. 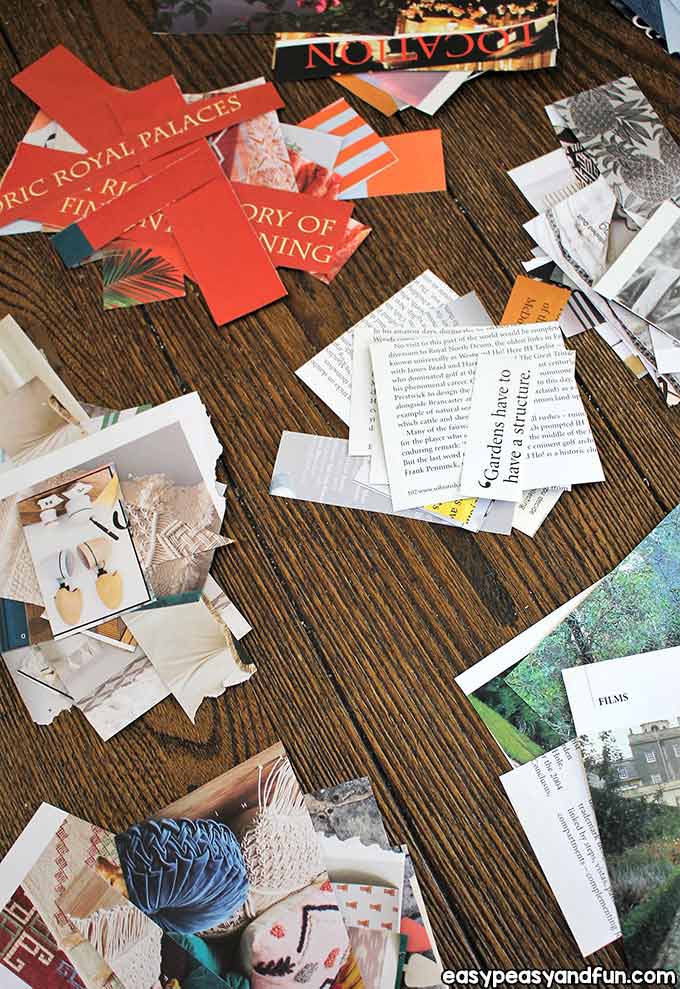 I had a list made up of fun words that you may see in a comic book, and I also had them think of some to add to the list, and then I told them to think of one they wanted to use. 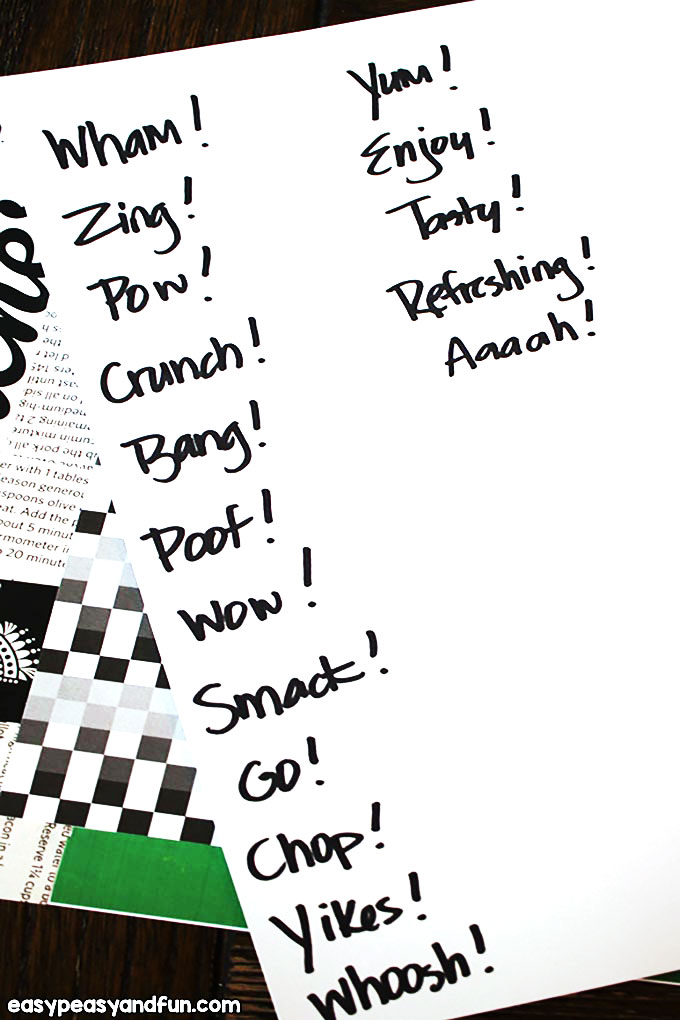 Then, based on that choice they would choose one piece of the patterned paper first, and go with a color scheme that coordinated with it. 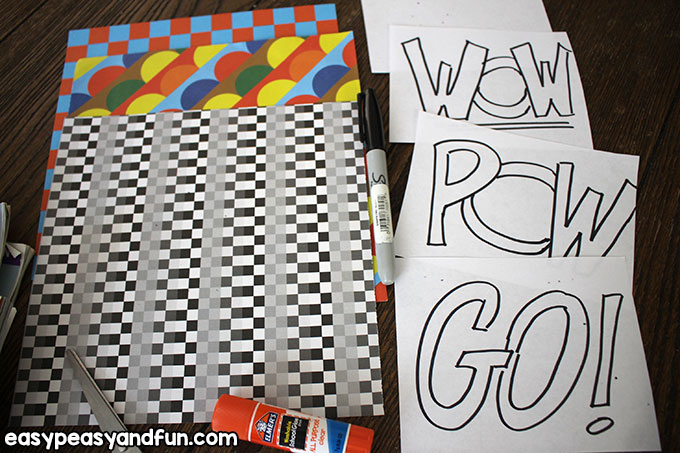 It will be attached in the center of the paper later with glue but show them an example of a final piece, so they can see where it will be going in the end at least.

Then, have them go through magazines and cut out various pieces of patterns and words to make a collage style border around the outer edge of the paper. 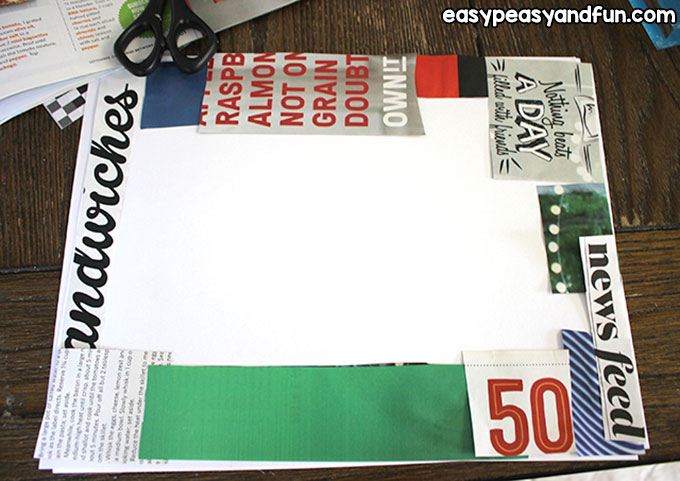 Choosing bold printed words, primary colors, and at least a couple of black and white pieces will help pull it all together and give it a “pop” look.

If it helps them know how many pieces to use, they can trace around the patterned paper in pencil to create a borderline, and that way they don’t spend too much time cutting and picking out pieces they may not end up needing.

Some kids will get hung up on trying to choose small, cute little objects that they are drawn to, but try to steer them away from too much of that.

That will take away from the style of the piece. I allowed some of the kids to keep those pictures to use on another piece later if they had a hard time with that.

Have them lay out the collage pieces on the paper before gluing anything down. 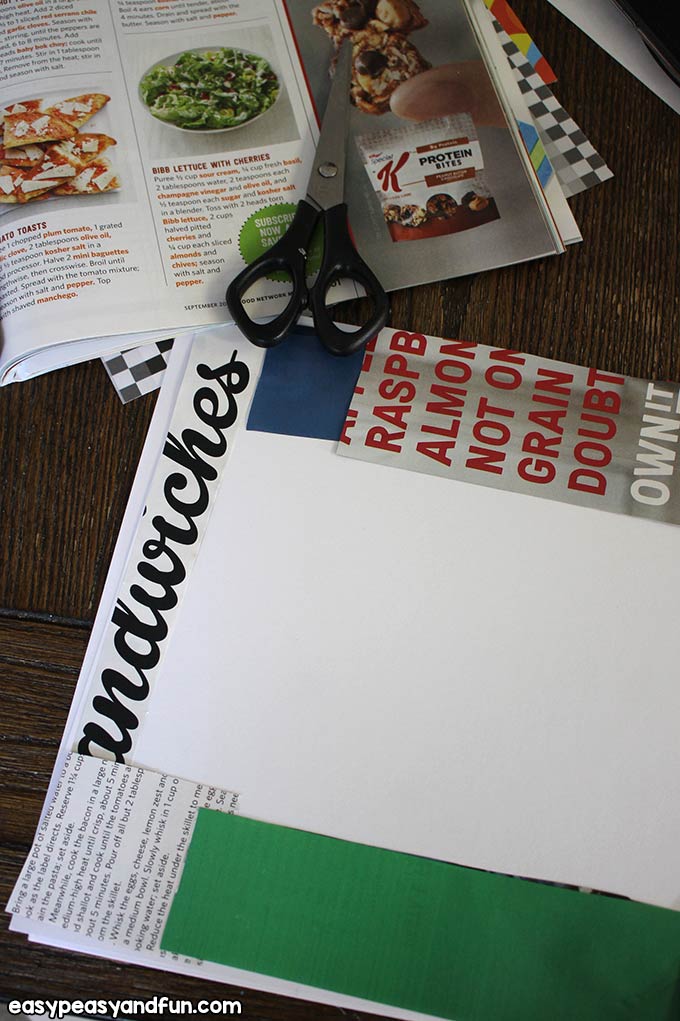 This is key, because some will just start gluing and then find that something they really wanted to show was attached in a spot that would end up covered up later, and it was too late to remove it without tearing it.

Have them treat it like a puzzle, moving the pieces around until they have all the space around the border filled they way they like it.

Then they can glue it all down. 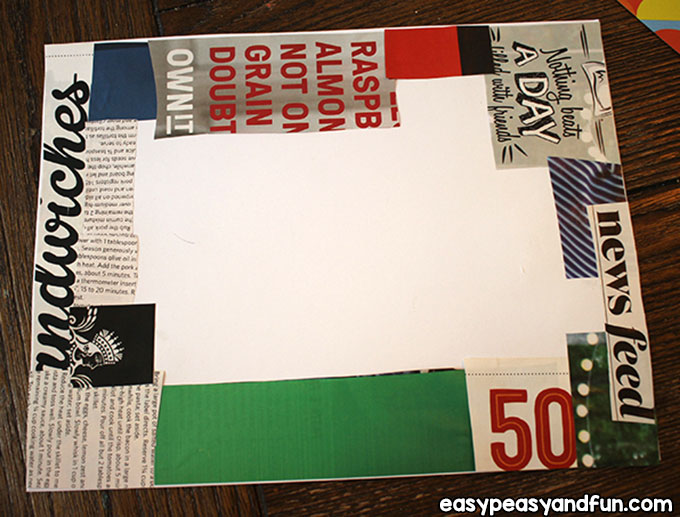 Once it’s glued, the patterned paper can be glued on top of it creating the base and center for the comic book word which is the focal point. 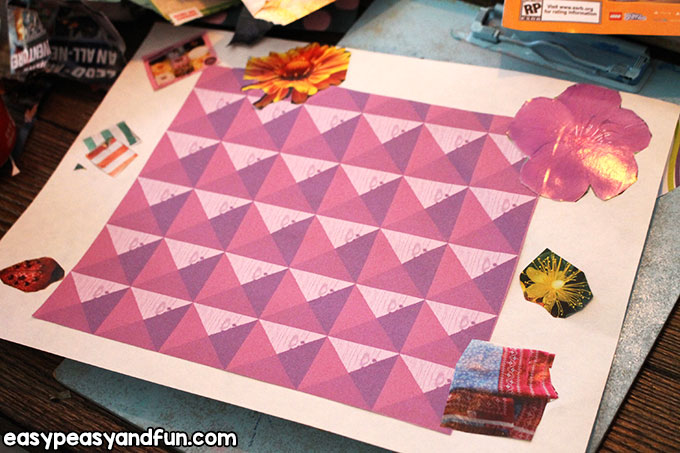 As they are cutting, keep a large paper bag nearby and encourage them to throw any scraps into it to help keep the space clean, and even if you end up being the one to do it, it helps to recycle the paper scraps and to keep the small pieces off the floor. 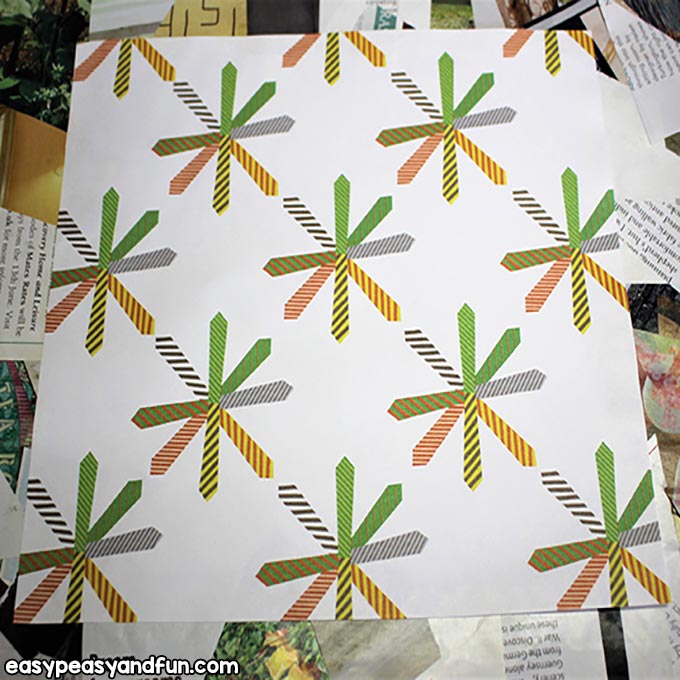 Depending on the size of the scrapbook patterned paper you use, you will likely need to trim it down to fit in the center and allow a few inches for the border. 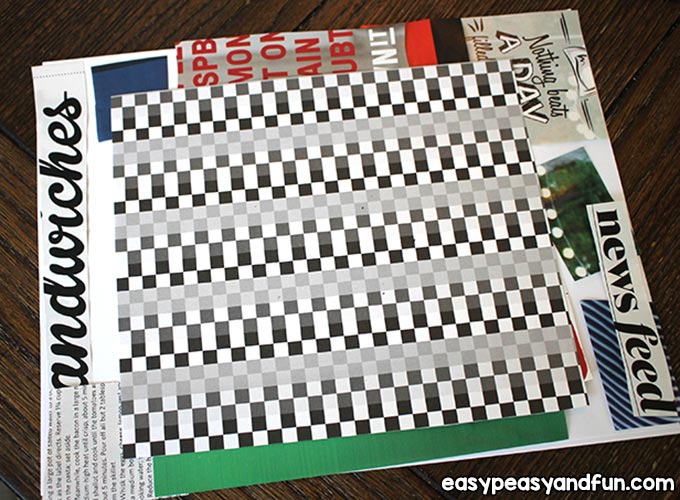 Now, either draw the word for them (I did this in most of my classes, but I asked each child first, in case they wanted to do their own), in pencil if desired first, otherwise in black marker.

The pencil can be erased before coloring it in, so if it helps to draw it that way before using the marker, that is best. 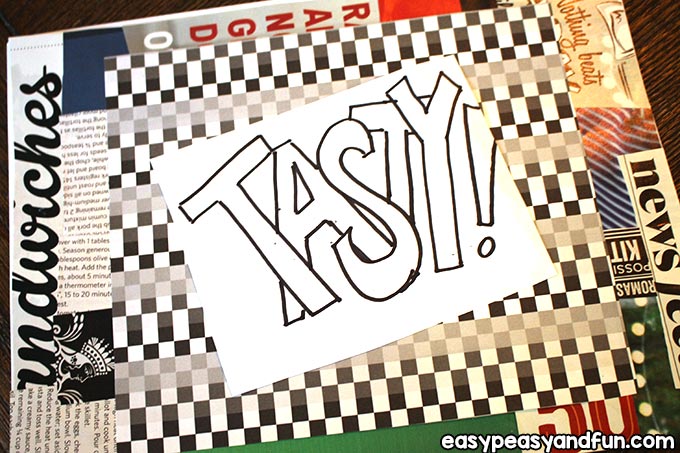 Then, have them use bright markers to color in the word in only one color or two, so that it really stands out on top of the pattern and collage. It is best if it coordinates with the pattern.

Once it is all colored in, glue in the very center of the piece. 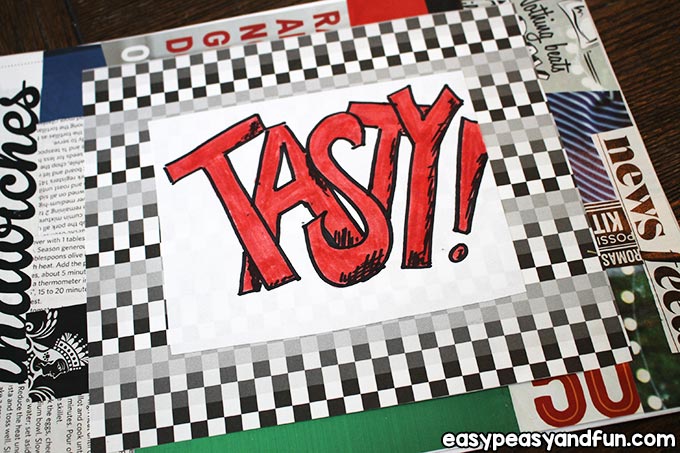 Tips for younger kids – They won’t truly grasp the pop art concept most likely, so it is best not to give them a ton of options for colors and collage items.

If you have them stick to one or two colors as their theme, they will understand that, and it will still come out looking more like a pop art piece.

I cut out color themed magazine pieces for them ahead of time, like a set of all black and white, a set of green, a set of blue.

All pieces that were in those tones and in bold prints that would all coordinate well. Then I let them choose which one they wanted after they chose the patterned sheet.

It helped to let them feel in control but without being overwhelmed with the work ahead of them.

Some kids may choose words that don’t really have the comic style to them but try to let them create the theme themselves if it works well.

Overall, they will find this to be a fun piece that is different from much of their art lessons. 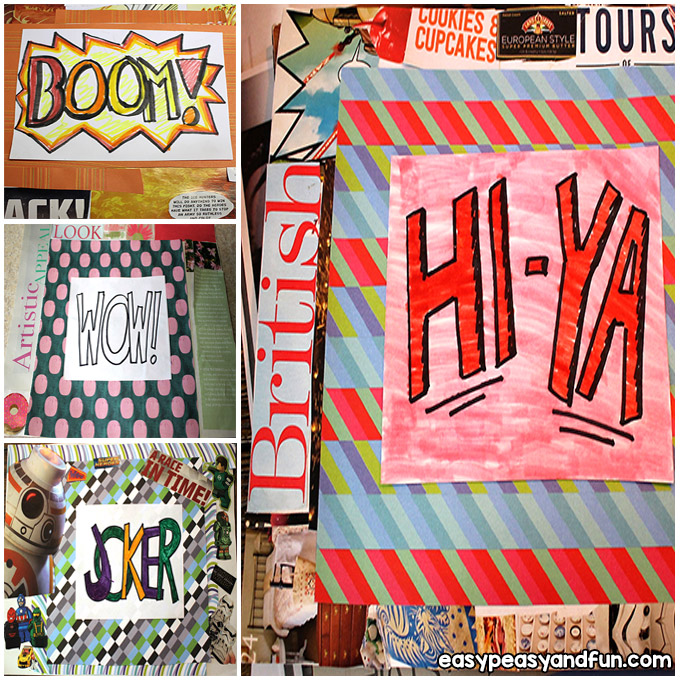 Project contributed by Mary B. H. from My Little Canvas